Half-a-dozen essays written in the 1970s and 1980s established Jean-François Revel, a philosopher/journalist with a zest for anti-Gaullist pamphleteering, as France’s leading anti-communist intellectual. In best-sellers with dire titles like The Totalitarian Temptation or How Democracies Perish, Revel noted that capitalist democracy, which carried with it an unprecedented degree of wealth and freedom, was widely seen as repressive, while communism, a demonstrably failed system, was considered even by Westerners as progressive. He concluded that the West was hopeless at exploiting its own strengths, and often more bent on rushing to its enemy’s rescue than on self-preservation. In the end, he speculated, the law of political evolution might be the survival of the least fit. Now that the Soviet empire has collapsed and capitalism is acclaimed from Managua to Ulan Bator, Revel’s ideas look even more unfashionable and irrelevant than they did a decade ago. In Le Regain Démocratique, he proves that they are as thought-provoking as ever.

The first half of the book deals with the end of the “cold war”. Revel stresses that he never argued democracies were doomed — there is a big difference between warning and predicting. In his previous books he merely described what might happen if democracies kept looking the other way while the Soviets pursued aggressive policies. As it happened, the Soviet ran out of ammunition. The victory of the West, Revel says, had little to do with a principled determination to stand up for its own interest and ideals.

Indeed, he points out that between 1985 and 90, democracies were at their appeasing best. In June 1990, for example, as the Soviet Union was about to collapse and the West had never looked so strong, Mikhail Gorbachev negotiated in Washington from a position of strength to obtain financial and political support from Westerners, who ignored the desperate appeals of independence-seeking Balts. The prevailing idea at the time was: “We must help Gorbachev in order to encourage reform.” The lessons of détente — that to reform communism you must start by ditching it and that aid only delays the process — had not been learnt. The West, Revel concludes, “never believed in its own superiority” and “was rescued almost against its will, not because it defended itself but because the forces which sought to destroy it unexpectedly disintegrated.”

Revel gives three reasons for this disintegration. First, from 1980 to 1985 democracies did show a rare readiness to support attempts to reverse Soviet conquests (notably in Poland and Afghanistan). Second, Communism became ideologically bankrupt — by the 1980s, Soviet leaders had stopped viewing themselves as saviours of mankind and had lost their political will to survive. Third, Gorbachev played a crucial role by seeking to replace the old apparatus with a new breed of officials who he thought would purge communism of Stalinist oppression and lead it into the next century. As could be expected, ordinary Soviets used their new-found freedom to relegate Marxism-Leninism, not just Stalinism, to the dustbin of history.

This analysis leads Revel to adopt an original position in the “end-of-history” debate. He shares Francis Fukuyama’s faith that capitalist democracy, as the best form of social system ever invented, will ultimately replace the others. But in the short term at least, he points out that history is made of men’s actions — it is up to them to move ahead or backwards. “A political analyst might, with solid arguments, say to a condemned man on whose neck the guillotine is about to fall: ‘Don’t worry, this execution belongs to an obsolete moment in history’. But in doing so he only confirms that nine tenths of what happens to us is made of the dregs of an earlier era.” The Chinese students might well one day be free, but not the ones who were crushed in Tiananmen Square. “Of course in the long run, it is probable that China will take a liberal course. But in politics I care about the short run, because life is short.”

The second half of the book analyses current challenges to the democratic resurgence. Despite growing awareness in developing countries that political and economic freedoms are vital pre-conditions, not by-products, of development, it will take a cultural revolution for those freedoms to take root in the Third World. As long as most Muslims reject the separation of Church and State, for instance, Arab countries will remain in the grip of tyranny and poverty. In the Eastern bloc, dealing with the psychological after-shocks of communism will be an especially daunting task. Even in the developed world, the growth of corruption and apathy threatens to undermine the moral foundation of free societies.

Democracy and human rights, Revel concludes, will prevail only if people believe in them and take actions to defend them. He stresses in particular the moral duty of international intervention: dictators should not be allowed a free reign of terror within their own borders.

Le Regain démocratique is a major political essay written in the razor-sharp style of a born pamphleteer. As was the case with Revel’s previous works, the aficionados will relish the clarity, the trenchant metaphors and the crushing wit; the others, after gritting their teeth through the first few chapters, will probably throw away the book and conclude that the author is a hopeless conservative.

Revel, in fact, is an uncompromising liberal — in the old European sense of the word and in the American “cold-war liberal” tradition. The American columnist George Will once elegantly defined the conservative as “a pessimist who goes though life hoping to be proven wrong.” Only by that standard could Revel be called a conservative. 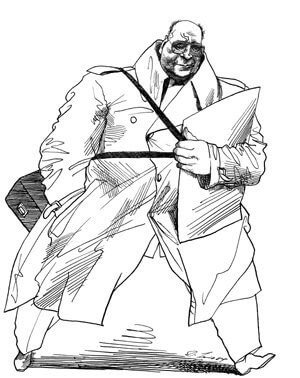